Pong was also the first commercially successful video game ever, which helped to establish the video game industry along with the first home video game console. I made this circuit board many years after the original Pong was designed and produced. With years of advancements in microcontroller technology, my circuit board size and quantity of components is drastically different.

I really enjoy making PCB’s, and once you have the schematic in an editor, you can set certain components to lock into place, and then route all lines around them.

In this case, I set the face components and then have the circuit side rerouted. It took a few replacements to get it so there wasn’t lots of component side wire links. You can see the vertical red and purple wires that cross over wires below, if this was a multilayer PCB it would be ok, however in this case I just used jumper wire.

It doesn’t have the eloquent lines of resistors as seen in my Nixie Tube Clock project, but what it lacks in symmetry, it makes up for it awesome chaos. 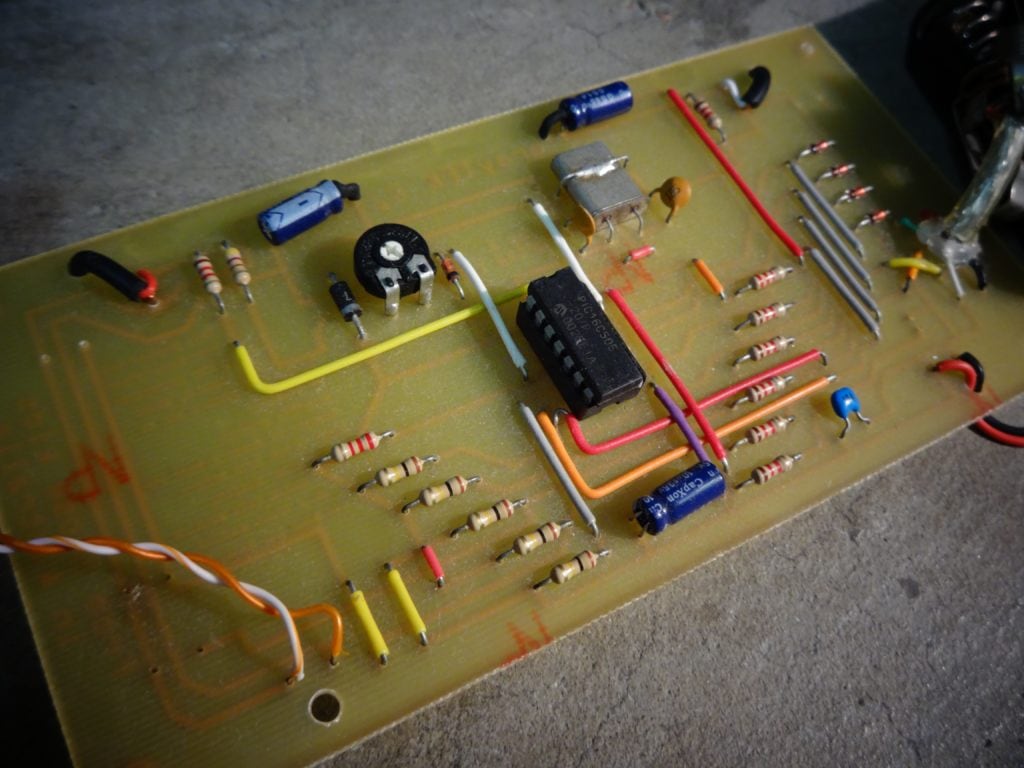 At the heart of this circuit design is the PIC16C505. Back in the day the PIC series of microcontrollers were great, I guess that still are great, but I always found them to be a little hard to program and compile.

The manufacturer website for the chip states it’s status as “Status: Not Recommended for new designs” which is a pretty fair statement, it featured:

When producing circuit boards, its aways fun to include hidden easter eggs or stories in the etch. In this case I’ve included nonsense about Monks and the 4th century.

This board in particular was made for some friends I met while traveling across Europe (Ben and Pete). I can not remember the genesis of why Pong was relevant, but I do remember etching this story with references to ‘Kids from Wales’ (where they lived) and Kids from Australia (me and my ex). They say you shouldn’t met your heros, but they’re wrong.

Years after making this circuit board, I’ve been able to form a friendship with Nolan Bushnell, and he’s legitimately an amazing person.

Nolan was also a guest on The Tomorrow Show, after chatting we played Pong, but instead of using a regular controller, I wired him into a device that listed to the electrical discharge signals in his arm when he flexed, and copied those signals into my arm, so when he would flex his arm, it would make my arm flex.

Also – while filming the show we had a technical issue, during that time Nolan comes about and basically does a stand up comedy routine!

War Has No Winners

At some points around the year 2000, I made an artwork piece inspired by Pong. It was paint on a hard card, designed to an accurate grid system.

I decided to name this Pong inspired piece ‘War Has No Winners’ however, when showcasing this to Geoff for the first time, he misheard me and thought I said ‘War Has No Women’ so that’s what it’s been named ever since.

These images are of the art in my Sydney Apartment with a Bally Supersonic Pinball machine – that apartment also had a Virtua Cop II and Time Crisis 50′ rear projection arcade, and a NEO-GEO 2 player cabinet running MAME.